Do you love talking about Anime?  Playing table top Role Playing Games, or just wanna Chat about anything in general?  Feel free to stop on in and say "Hiya!" 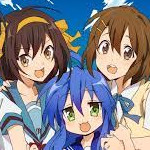 Last post by Lookout - Today at 08:15
"And I'm not wearing their meager rags, because they are unbecoming of one of the upper-echelon members of the idealogical organization of ACROSS." commented Il, looking over the rag-tag group.

"You appear to be a group of inebriated vagrants who act as a travelling showmen. Tell me, where is your next preformance? Generally, freakshows draw a large crowd of people: ideal for spreading enlightening ideas to members of days gone by."
#12

Last post by EK - Today at 08:14
L stared at the dog boy, quirking an eyebrow. "Well..." he began. He paused for a moment, recalling back to what he was doing before. Right, college freshman-- trailing after suspect. Why not use same cover? "I'm in college if you know what that is."
#13

Last post by Senkusha - Today at 08:14
The white haired dog-man lowered his sword saying, "It's clear to me that you're all from the same time as Kagome.  Why aren't you all wearing the same style clothing, I wonder."
#14

Last post by EK - Today at 08:14
L stared at the fox boy, blinking. Friends? How did the girl even come here in the first place? How did he get here? "No," he replied, stuffing his hands in his messy jean pockets, "This is the first time I've met your friend."
#15

Last post by Senkusha - Today at 08:14
Hearing the vulgur ranting coming from Il Palazzo, she yelled over to him, "Hey!  watch your language!   There's a kid here!"  She pointed over to the fox boy as she walked over to him.

"I can fix that.  It's very ineffecient and not to say, it sounds horrifyingly simple."

The little fox-boy asked, "You're friends with Kagome?"
#16

Last post by EK - Today at 08:13
L jumped when he heard Il's incredible ranting and he spinned around to see him yelling at minature game counsel. "Well, in your logic," he explained, "you would be corrupt too." He hated people like him; it was much like Kira's logic too.
#17

Il Palazzo walked over to the boy and shook his head:

"Well, there's your problem to begin with: videogames are the epitome of corruption! Why, with the morals that they perpetuate, they-"

The armor-clad leader spotted a small plastic device not too far away from the group: it was his miniature game system. He brought it to himself with his telekinesis and began playing it.

"As I was saying, videogames only perpetuate bad moral values."

Looking calmly down at the shocked Tsukasa, he fixed his ruffled hair and coughed lightly.

Last post by TechnoDragon - Today at 08:13
As he sat there curled in a ball he heard someone mention something about an electronic device.  Without lifting his head...

Quietly, "I was playing my video games right before I went to bed, a bright light started shining and I thought this all was a dream, until now.  I wanna go home"
#19

Last post by EK - Today at 08:12
Well, that just proved his theory. He looked at the girl, dressed in a high school uniform. She was definately from present time. "No," he answered simply, "We're from the present; you are from there as well, I suppose." He walked over to the girl. She only looked to be in her teens, but she was the best choice on someone to talk to. "I guess this is around the 1400's? Not many people wear hand sown kimonos anymore..."
#20

Last post by Senkusha - Today at 08:12
Skuld finally opened her eyes and sat up wearily holding her head with her hand.


"Ohhhh.  My head."  She slowly stood up and stumbled over to L shortly after he asked, "... electronic device?" Her curiousity was perked to hear the new comer's answer.